The future of Social Bookmarking 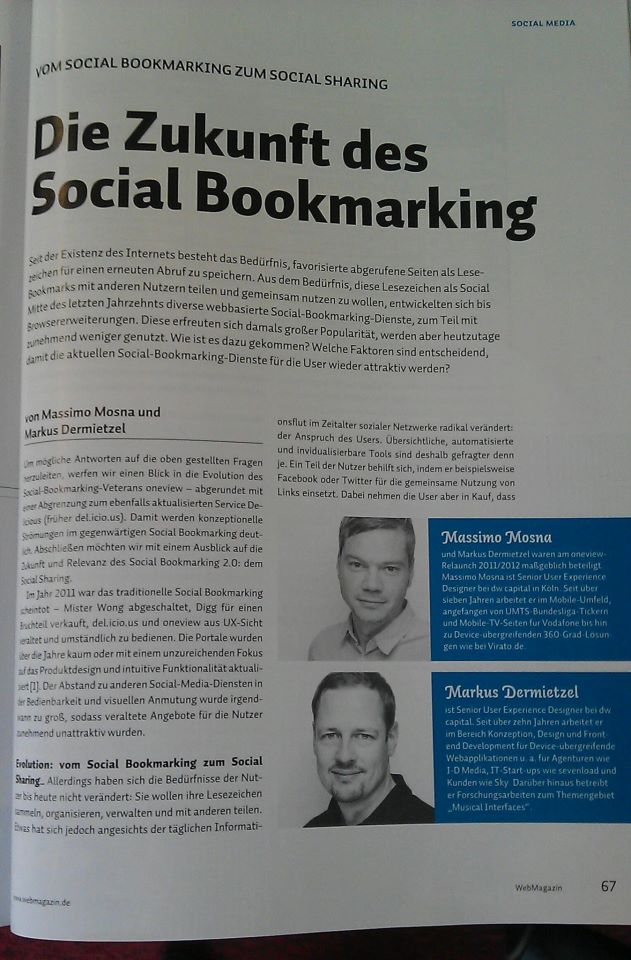 The new German „WebMagazin“ is now available (formerly known as CREATE OR DIE)! We are proud to be a part of it with our view of the future of social bookmarking and social sharing. Dive into oneview’s history on six pages (p. 67-72).
The online article is here: webmagazin.de – „Die Zukunft des Social Bookmarking. (Source: @cdebruijn) 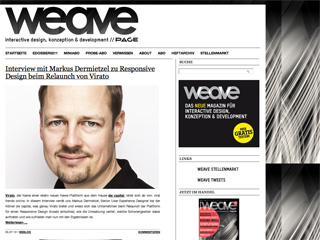 I was asked to report my experiences on the design process and frontend development of virato´s Responsive UI. Several german online media portals published my thoughts.

Weave published an Interview with me on Responsive Design and How-To-Techniques.

Another Article in CREATE OR DIE refered to my slideshow on the basics of Responsive Design.

This will be a huge step forward in future User Experience Design. Since I saw the video almost 2 years ago, I am sure, some day there will be tactile user interfaces, which really work.

German culture tv channel "arte" was televising on April 25th 2009 a highly interesting documentary (duration: 55 min.) on Babylon. The most fascinating thing were the images of babylonic wedge writing, whose pictograms were written in clay or engraved in stone. A sophisticated system of signs, which has been the foundation for current and following ancient literature of this region and beyond. Also interesting the pictures of the capricorn with engraved Codex Hammurabi, an ancient constitution with codes of law by King Hammurabi of Babylon, which was visible to all citizens.

In Basics of design

As I recently strayed through the still wonderful "Praystation" of Joshua Davis, a beautiful topic of "classic" graphic design, which is continuously edited in the digital age, became apparent to me. The wonderful "Carnivore" of 2002, dynamically in Flash generated transparent circles of Joshua Davis, are very similar to the graphic experiments in "16 Constellations" (1975) of Max Bill. Forerunners of these experiments were started by Bill already in the 30ies of the 20th century.